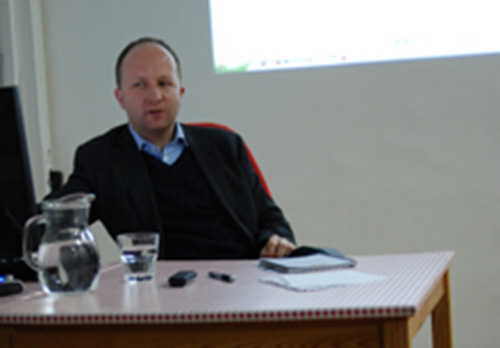 Andrzej Szczerski: Curating and the Importance of an Artwork

World of Art | Year 14 | Reflections and shifts in curatorial, critical and artistic practices

Contemporary curatorial practice appears to be dominated by two main approaches. The first perceives curating as an act of social relevance, which allows the translation of art into something relevant to the public sphere and current social or political debates. Hence the exhibition or any other form of curatorial practice needs to transgress the limits imposed on art by traditional art history or art criticism and speak the language understood by mass audiences. Curating, therefore, is given an almost moral dimension and situates itself between research, teaching and reform. This approach is particularly favored in those parts of the world where contemporary art has an explicit role in processes of political change, while exhibitions and cultural institutions are urged to contribute to the transformation process. One such region is Central Eastern Europe, where, especially in the 1990s following the fall of communism, a new curatorial practice began to be shaped. Politically engaged art was promoted as an attribute of the new democratic society and a signs of the openness of the public sphere, where art was given a prominent role in expressing the new democratic values.

The second dominant approach emphasizes the idiosyncratic character of curatorial practice and resembles the act of connoisseurship. The curator is not assigned the tasks of a preacher, but of an arbiter of taste. His or her individual preferences and hierarchies of values play crucial roles in exhibition making, and individualism becomes the dominant mode of expression. Curators can express their personal politics rather than comment on issues relevant to the current political situation, while various cultural contexts are emphasized, not necessarily answering the questions of the here and now. This curatorial individualism can be perceived as a liberating experience, especially against the ideological dogmas of the contemporary world, but often risks becoming self-centered and solipsistic. Curators produce their individual mythologies, while exhibitions resemble stage sets and theatrical performances or complex, but self-centered, writings, expressed in the new ‘exhibitionary order’.

Both of these approaches result in different practices of exhibition making. In the first case, an exhibition understood as a collection of objects shown in the clearly defined premises of an art institution is often rejected in favor of more socially engaged acts in the public sphere. If, however, the traditional model of an exhibition is chosen, it often has a didactic character and the works on show are are accompanied by too much commentary. The abundance of didactic materials recalls Peter Vergo arguments about ‘contextual exhibitions’, where the object has little intrinsic significance, but is ‘a token of a particular age, a particular culture, a particular political or social system, as being representative of certain ideas or beliefs’. In the second approach, where the exhibition is a preferred mode of expression, its logic is often intrinsic and the objects are left without too much explanatory material. To quote Vergo again, in such ‘aesthetic exhibitions’ the object itself is of paramount importance. ‘Understanding’ is essentially a process of private communion between ourselves and the work of art; we are supposed merely to ‘experience’ it.[1] Most importantly, if either approach is taken to extremes, the actual artwork may disappear completely. In ‘contextual exhibitions’, anything can be exhibited if it fits the logic of the presentation, and the curator is not obliged to remain within any limits. Therefore, the exhibition can become a collection of labels, while curating can be equated with any form of social or political action. In ‘aesthetic exhibitions’, the artwork can remain silent and dominated by the idiosyncratic concept of the exhibition, hence the act of its personal ‘experience’ by the viewer − which is not subservient to the exhibition context − is difficult to define.

These relations between curating and the importance of an artwork are deeply rooted both in broader cultural transformations of the notion of art and its role in society, but also in the evolution of contemporary art history, which began in the 1970s.[2] The impact of semiotics resulted in the total semiotisation of reality, while humans are to be perceived as ‘semiotic beings’. The artwork inscribed in the semiotic world lost its privileged or exceptional status and was defined by its capacity for representation. In the 1980s, New Art History questioned further the cultural status of art and focused on materialistic, contextual and ant-formalist approaches. It promoted the perception of artworks as historical sources and as objects which performed historically variable functions, religious, aesthetic, political or mimetic. The advance of post-structuralism in the next decade promoted the study not of art but of representations and the cultural politics of art institutions and their founders. The reaction to these changes focused on the recuperation of the art work by hermeneutics, which looked especially to painting and its unique iconic sense, defined as different both from reality and from language. A new chapter in study of images was opened by Hans Belting and his An Antropology of Images, published in 2001, where the anthropological approach allowed him to show the continuity between image, body and place, therefore strengthening the non-canonical approach to art while trying to preserve its different status within the material world.

While the transformations within art history can be seen as the source of curatorial practice, it is crucial to remember that art historians do not possess the same means of expression as curators. Therefore, the process of exhibition making operates within a different register and allows the overcoming of problems typical of art history, which is based on the written word and largely confined to academic, mostly elitist circles. On the one hand, an exhibition is an event which happens within the public sphere, even if access to it is restricted, and therefore consciously has to reflect on the social and political contexts which surround it. The arguments of New Art Historians are therefore built into the structure of exhibition making and do not have to dominate the exhibition itself. On the other hand, an exhibition is based on the personal experience of an artwork and does not have to rely on a highly difficult process of translation of its visual or any other structure into words, which is the demanding task of art history. By definition, within an exhibition, an art work does not need to render its uniqueness with the aid of language. Therefore, an exhibition avoids the contradictions between word and image which may hinder hermeneutical interpretations or even make them incomprehensible.

I would therefore argue that the particular status of exhibitions is based on the presentation of artworks which are the major medium both of expression of individual ideas and communication with the audience. The exhibition needs to be based on the broadly defined aesthetic experience built into the artworks, as it constitutes the specificity of the exhibition, but without escaping into the domain of ‘relational aesthetics’ and its non-artistic connotations. Therefore, exhibition making can benefit from the traditional analytical tools of art history, such as a formalist analysis of an art work or iconography, to build correspondences between the artworks themselves. Instead of focusing on representation-ideology-authorship as promoted by New Art History and post-structuralism, it needs to reevaluate the artwork-content-artist relation. The exhibition also avoids the fundamental problems of hermeneutics as, instead of translating images into words, it can build complex relations between the artworks using their own language as their visual aspect or any other physical aspect that is at the curator’s disposal. Hence the artwork becomes the principal element of the exhibition and its only medium. While this approach allows the uniqueness of the artwork and its self-reflexive character to be emphasized, it also opens it to a set of interpretations during the process of viewing. An exhibition based on artworks is not detached from reality, as it necessarily happens in particular circumstances, but most importantly revives the importance of the individual viewer and his or her perceptions of the show. Avoiding both an overtly ideological and solipsistic mode of curating, the carefully built network of correspondences between the works allows the viewer to evaluate it in their own way, as all the necessary evidence is placed before their eyes or any other senses. At the same time the curatorial message inscribed in the selection of works does not disappear and becomes an obvious reference point, so the viewer is not left alone with a set of randomly collected objects. In reference to hermeneutics, one may speak of a reappraisal of the phenomenal status of an artwork, which gives the viewer the utmost freedom to discover its message and, therefore, that of the exhibition itself. Thus the exhibition becomes a space for open debate, rather than a mode of teaching or curatorial self-expression. Within this set of theoretical premises, the exhibition can become a relevant mode of public debate, as the means for its understanding are available to each viewer, so the curatorial message can be evaluated in situ, so while visiting the show the very debate can develop and lead to conclusions. This approach is also a mode of reappraising art as a particular domain of human culture, which cannot be compromised or associated with other spheres of the material world. Hence the exhibition can reinstate its place within society, showing the importance of art and the impossibility of replacing it, either with commodities or ideology.