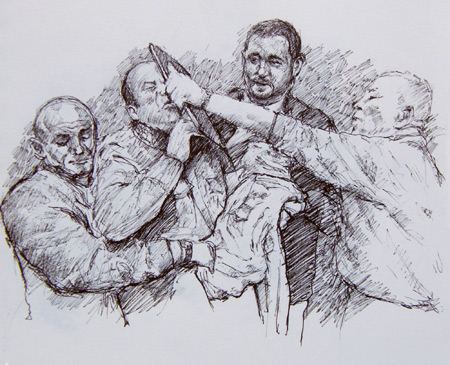 Edit András: The Trajectory of Criticism in the Time of Post-Socialist Nationalism Péter Donka, Untitled, 2013. This drawing depicts a brawl during the first meeting of Hungarian Art Academy with Free Artists, when one of their representatives, was attacked by a member of HAA. Courtesy: Csaba Nemes

The ruins of socialism (again) proved to be easily transformable into a fertile soil for nationalism. Hungary is in the forefront in its illiberal transformation of society, which has, in order to perfect or decorate its (nationalistic) edifice, finally incorporated art and culture. The authoritarian and systematic process has – by means of leadership and policy – led to the expansion of the closely controlled institutions and to the shrinking field of critical contemporary art and art criticism.

The lecture wishes to trace the trajectory of the cultural takeover from the first coup d’état through the step-by-step invasion of all the segments of the field of culture to the total annexation of almost all institutions, the major positions and the majority of financial subsidies. In parallel to this crushing operation, this lecture will reveal the initial vehement reactions against the national cultural politics fuelled by the rise of protest movements at the home front and abroad, as well as the alternative ways to operate outside the institutional framework. The creative and unorthodox practices and genres invented by the marginalized art community and the creativity of the colourful visual activism will also be presented, including the critic who is forced to find his/her position within the new environment.

The most recent condition, the changed strategy of the official cultural politics that could be defined as “normalization”, will be introduced as it enables an analysis of the new dilemma the critic is confronted with. The changed nature of censorship and the distinct shifts between the seemingly analogue set-up of the Cold War socialist-time underground critique and the post-Cold War nationalist-time criticality will be scrutinized and interpreted.

Edit András is an art historian, art critic and lecturer based in Budapest and Long Island, NY. She is affiliated by Institute of Art History, Research centre of Humanities of the Hungarian Academy of Sciences, Budapest. Her research field is critical theories, contemporary art in the post-socialist Eastern and Central Europe, gender issues, public art, critical practices and nationalism. She has widely published in art magazines such as Springerin, ThirdText, e-flux  and Artmargins. She is member of the editorial board of Artmargins online and Ars Hungarica. In 2008 she got the art criticism award of the Hungarian section of AICA.
editandras.arthistorian.hu The lecture will be held in English and is part of the World of Art public programme How Critical Is the Condition of Critical Writing?

Organised by: the Igor Zabel Association for Culture and Theory; SCCA–Ljubljana / World of Art; Halle für Kunst & Medien, Graz
The programme is supported by: the City of Ljubljana – Department for Culture; ERSTE Foundation