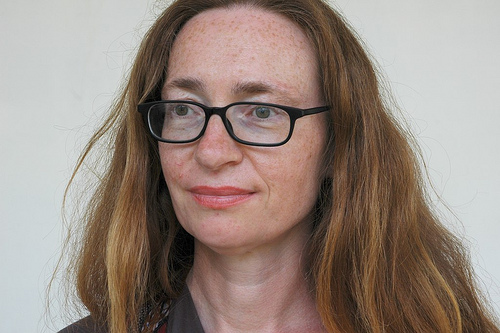 Elke Krasny: Unplanned History – Writing It Down/Writing It Up as a Critical Curatorial Practice

The title of this lecture proposes a paradox as its starting point: unplanned history. History eludes planning, it has already happened. Still, the notion of the unplanned, as the lecturer emphasizes, is not the only conduit into history. Quite on the contrary, the writing of history, as feminist and postcolonial scholarship have shown, needs care and planning. Elke Krasny will position a different genealogy of feminist urban curating (largely unwritten) and feminist strategies for writing an urban history that otherwise will have remained untold and invisible. These two histories will be unfold in parallel as part of an ongoing exploration of critical spatial practices in urban curating and of feminist (proto-)curatorial models of conviviality and the writing of unwritten history. The Woodsquat, Campers took to the sidewalk after Vancouver Police shut down the occupation inside, Vancouver, 2002.

Presented examples will reflect these concerns from a historical and transnational perspective. Examples given will range from late-19th century feminism to artistic, curatorial and writing practices by Dolores Hayden, Suzanne Lacy and Lucy Lippard and some of Krasny’s own work as an urban curator.

In combination with the lecture, the workshop will look at the interrelations and interdependencies between critical practices of artistic production, curatorial approaches, issues of urban epistemology and research-based strategies. The focus will be on conviviality and care and on issues of vulnerability, resistance, knowing bodies of agency/(un)known bodies of writing.

The workshop will combine the format of a read-in with an urban walk through the Tabor neighborhood, which we will develop collectively. Texts will include writings by Elke Krasny (On The Urgent Need for Contemporary Action), Judith Butler (Bodies in Alliance and the Politics of the Street) and Rosalyn Deutsche (Uneven Development: Public Art in New York City). Participants will receive texts after handed in application.

APPLICATION
The workshop is free of charge and will be held in English. The number of participants is limited.
Applications will be accepted up until Friday, February 28, 2014.
Please send applications to: info@igorzabel.org
The application should consist of a short biography, with the focus on research and engagement with/in urban space.

Elke Krasny is a curator, cultural theorist, and writer. She is a Senior Lecturer at the Academy of Fine Arts Vienna, Austria. In 2014 she is City of Vienna Visiting Professor at the Vienna University of Technology. In 2013 she was Visiting Professor of Architecture and Urban Research at the Academy of Fine Arts Nürnberg. Her theoretical and curatorial work is firmly rooted in socially engaged art, architecture and spatial practices, urban epistemology, post-colonial theory, and feminist historiography. These events are part of the 2014 World of Art public programme, which is being prepared by the SCCA-Ljubljana and the Igor Zabel Association for Culture and Theory.

The programme is supported by: the City of Ljubljana – Department for Culture; ERSTE Foundation.