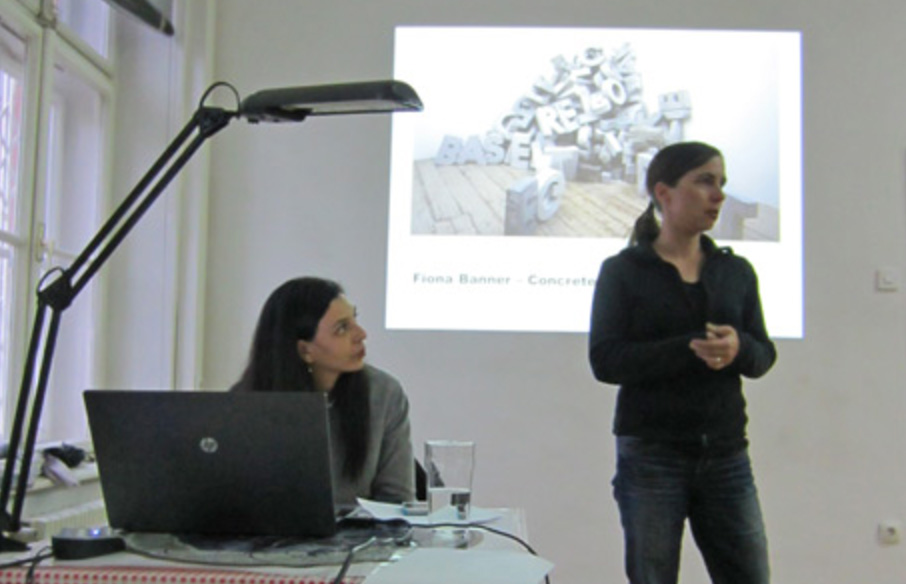 Lina Džuverović: Words Are People.* Text As Art And Art As Text

The relationship between the written word and the work of art is continuously shifting, tripping up, and being reborn and newly reconfigured. The current post-Internet (network-aware) moment, in which the work of art is characterised by a confluence of the written word, the image, and the network, enables the artwork to tap into the legacy of conceptual art, Fluxus, concrete poetry, Dada and net.art, while also being shaped by the conditions of its networked present.

In this lecture, Lina Džuverović reflects on the intersections between text and art, both in reference to its history of 20th century text-based practices, and through an open, still-in-formation reflection on its present conditions. We will consider art as writing, writing as art, writing about art and art about writing. The focus of the lecture will be on practices, current and historical, which center on the negotiations of the written word and the work of art. Somewhere along the way we will also encounter, and reckon with, performance. Case studies will, amongst others, include wide-ranging examples such as the work of Kenneth Goldsmith, Hito Steyerl, Travis Jeppesen, K-HOLE, Tony White, Kim Gordon, Will Holder, Sue Tompkins, Vlado Martek, Goran Trbuljak, and Mladen Stilinović. Lina Džuverović (Zagreb/London) is a curator and PhD candidate at Royal College of Art/Tate Modern. Between 2011 and 2013 she was Artistic Director at the Calvert 22 Foundation in London – the UK’s only not-for- profit foundation dedicated to the presentation of contemporary art and culture from Russia, Eastern Europe and CIS countries. Prior to that she was an Executive Director of Electra, a London-based contemporary art agency which she co-founded in 2003; and a Media Arts Curator at the London’s Institute of Contemporary Arts. Her writing has appeared in several art magazines, including Contemporary, Art Review, Artforum, and The Wire. Currently she is pursuing a PhD in critical writing at the Royal College of Art in London. This programme is being prepared by World of Art / SCCA – Ljubljana and the Igor Zabel Association for Culture and Theory. The lecture will be held in English and is part of the World of Art public programme How Critical Is the Condition of Critical Writing?

Organised by: the Igor Zabel Association for Culture and Theory; SCCA-Ljubljana; and UGM | Maribor Art Gallery.
The programme is supported by the City of Ljubljana – Department for Culture and ERSTE Foundation.