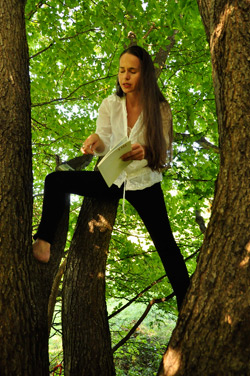 Petra Kapš: Lethe or Mnemosyne for the fu-(ture), OR as omnipresent trinity: poiesis, techné, parrhesia The roots of OR could be traced in words for oracular, oratory, rhetoric practices, OR could also be followed into a nucleus of order, it could be suspected in correspondence to form, and as a core of organum. OR as a structure of discourse, OR as sonic murmuring coming out of the mouth. OR as a signifier, poetic modulator and inspiring force, mirroring the rest of the future. OR as a symptom while our civilization of meaning and (mis)understanding should drink from the spring of Mnemosyne to refresh herself with complex endeavours of poetical. OR is the axis of our discursive civilization.

I will lecture about my long-term interests on flourishing and/or reduction of meaning(s), order – form, and will stress one of my maxims: invention of aesthetic (form) is in a correlation with understanding and communication. In this evolutive path of her efforts, she will interrelate writing, curating, organizing, performing and investigating and will stress the importance of both: reductionistic rational logic-analytical based actions and associative poetic universe of rhizomatic eventualities. (Petra Kapš)

Petra Kapš (Maribor, 1975) is an independent author, working as writer, researcher, performer, curator and producer.
Her studies of slovenian language, theology, philosophy, aesthetics and specific art phenomena are interlinked with researches of different aspects of media, word, image and sound. Currently she is preparing her PHD on significant shifts between oracular, oral and rhetorical practices in ancient Greece with possible effects of the later in artistic practices in western context.
Since 2003 she has been extensively writing about different art phenomena, art works and artistic practices. In 2010 she self-published her first book –OR– changes of art, Book Nr. 1, and in 2011 she began with her e-mail critical correspondence OR reflection. She led artists run space Open studio with Iztok Maroh (2007–2010), co-founded and actively participated in the TU Society for the Promotion and Development of Culture (2004–2007) and the assembly so0gledi (2007–). The first steps in a long-term research work OR were made in 2010 with the project –OR– changes of art, Being poetic in correspondence with an oracle (exhibition, book, lectures, performances, and debates, with: Alenka Pirman, Katarina Zdjelar, Borut Savski, Tao G. Vrhovec Sambolec, Evelyn Müürsepp, Erkki Luuk, John Grzinich, Simon Macuh, Marko Košnik; Likovni salon Celje). Some of her latest and most prominent projects are: discursive project “On” – reflection of art (ten discussions with artists, curators, critics, theorists, producers on some of the basic topics in art; in cooperation with KIBLA Maribor, 2008), After curatorial dinner (curatorial dinners with seven artists, research, in-situ exhibition, with: Riho Kall, John Grzinich, Evelyn Müürsepp, Toomas Thetloff, Patrick McGinley, Erkk Luuk, Anna Hints, in collaboration with Moks, Center for art and social practices, Mooste, Estonia and Tomar, Portugal), project Laboratorium (The World of Art, organized by SCCA-Ljubljana) and LabSUs, open platform of curators, artists, writers, theoreticians (Gallery Škuc, Ljubljana, 2007). Sound-video-text installation Transition (Kazemate, Ljubljana Castle, together with Iztok Maroh, 2009) was a turning point, where words and texts were not used as words about art, but as the art of words. She started her performative readings with This late or already, 50 (49) questions for Admission Free (Spitall Chapel, Celje, 2010), followed by Hearing Eurydice in project Public readings and performative lectures. She started performative writing in-situ with 44 (20) questions for the ARZENAL DEPO 2K9 (Viba studio, Kapelica Gallery, 2009) and continued with latest 47 (8)>(7) textual fragments for Radio Art Space (personal computer, typewriter and a fountain pen … homage to Friedrich A. Kittler and his essays Gramophone Film Typewriter, Gallery Škuc, December 2011).

Production: SCCA, Center for Contemporary Arts
Co-production: Postgraduate Curatorial studies of Institute Cultural Studies in the Arts (Zürich Art University)
Supported by a grant from Switzerland through the Swiss Contribution to the enlarged European Union.