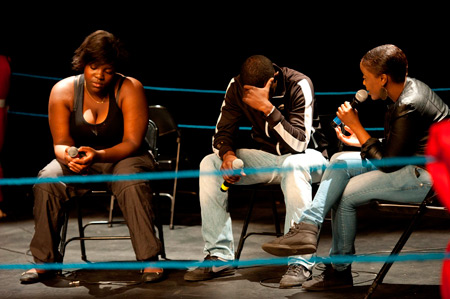 Organised by the SCCA-Ljubljana, Centre for Contemporary Arts – World of Art Programme with cooperation of Igor Zabel Association for Culture and Theory and Modern Gallery. In her lecture, Nataša Petrešin-Bachelez will present one of the most unique spaces in France for artistic research residencies programmes – Les Laboratoires d’Aubervilliers, where she was co-director between 2010 and 2012. Based on her experiences of working in this institution and the writings of Donna Harraway, she will elaborate on the notion of situated artistic research and the “reflexive” residency programme.

Each one of us who has stayed somewhere for some time might agree with Donna Haraway, who says, in defining what partial perspective means, that “the only way to find a larger vision is to be somewhere in particular.” As with any activity, artistic research is done in an environment/context that has its own particular constraints, institutions, languages, cultural references, its own habits … Artistic research can be done in a meaningful way with consideration of the conventions of that context and in reaction to it. Situated artistic research should imply a research that develops fully its opportunity through adaptation to its environment, or, to measure and experiment with the results of any modifications applied to that environment, which can in turn also modify the research. The need to situate a practice drives the creation of local projects that proudly stand for their “contextual”, “community” or “participative” activity. Development of such projects needs a certain elasticity of time and the privilege of taking time. This is crucial for undoing the protocols of exchanges between the artist, institution and the public (visitors, participants, passers-by), which are set by art institutions, often just on the basis of abstract projections.

Nataša Petrešin-Bachelez is an art critic and independent curator based in Paris. She graduated from History of Art and Comparative Literature at the Faculty of Arts, Ljubljana and holds an MA in Theory of Art and Languages at EHESS, Paris.
Since 2006, she has been leading (with Patricia Falguières, Elisabeth Lebovici and Hans Ulrich Obrist) the seminar series “Something You Should Know” at EHESS, Paris. In 2010, she was associate curator of the exhibition “The Promises of the Past” at the Centre Pompidou, Paris, and guest curator of the art fair Paris Photo, with the focus on Central Europe. From 2010 to 2012, she was co-director of Les Laboratoires d’Aubervilliers, Paris. Currently, she is the curator of U3, Triennial for Contemporary Art in Slovenia, at MSUM+, Ljubljana.
Petrešin-Bachelez contributes regularly to publications and catalogues as well as international art magazines (e-flux journal, A Prior Magazine, Springerin, Bidoun, Parkett, Sarai Reader, ARTMargins, Maska). She is a member of the editorial board of ARTMargins, Contemporary Central and Eastern European Visual Culture (UC Santa Barbara). Since 2011, she has been the chief editor of the Manifesta Journal.